La Via Silente is a circular route of about 600 km that traces coastal stretches and penetrates the mountains of one of Italy’s largest National Parks: the Cilento, Vallo di Diano and Alburni National Park. Divided into 15 stages, with an optional stage reaching the summit of Mount Cervati (1898 m a.s.l.), La Via Silente owes its name to the sonorities of the places it passes through, where silence overbearingly settles in, almost completely neutralizing the annoying noises of human activities.
The route starts from the small village of Castelnuovo Cilento, just a few kilometers from the Vallo della Lucania – Castelnuovo railway station.
The first hilly section, which is very scenic, soon returns to the coast near Pioppi, a small fishing village; from here the route follows the coastline for about forty kilometers and then heads inland, ascending, with no small effort, in the direction of the small town of Castellabate.
It will take about four hundred kilometers for the wayfarer to see the sea again, but in the meantime he will have crossed a wonderful land, bathed in the clear waters of the Calore River, enjoyed the enchanting charm of the caves of Castelcivita and Pertosa, reached plateaus, beech forests, valleys dotted with orchids, and enchanting farming villages. His time on the Via Silente will have been magical though not without its difficulties; for this Way traverses and challenges a rugged, wild and precisely for this reason authentic land, and it is good for the traveler to be aware of this from the outset.

On Dec. 1, 2014, the “La Via Silente” Association was founded by a group of young people from Cilento engaged in a project to enhance and promote their land. The aim of the Association is to create, monitor and promote a Ciclopercorso that crosses the entire territory of the Cilento National Park and, crossing the Alburni Mountains, goes as far as the Vallo di Diano.
The path is in broad strokes the one traced by Carla and Simona, who in June 2014, riding their bicycles and with an unusual baggage made of pencils, sketchbooks and a diary, ventured out to discover their land, involving in an extraordinary journey that lasted 28 days, hundreds of people connected on social networks or met on the road.
The association they founded now relies on the cooperation and expertise of a staff of cartographers, webmasters, graphic designers and tourism management experts and maintains relations with all industry figures distributed along the 600 or so kilometers of the route.

Velina, a hamlet of Castelnuovo Cilento, is home to Via Silente at 96 Velina Street. This is the place where one can register on the route by withdrawing “La Silentina,” a document containing one’s personal details that certifies the presence of the cyclo-traveler on the Route and guarantees food and lodging at agreed prices. The owner of the accommodation facility, when welcoming the visitor, must place a stamp on the Silentina with the date of arrival and the name of the town where the facility resides.
This small measure will ensure that we can monitor the presence of visitors along the route and operate constant feedback on the overall functioning of the infrastructure to the great benefit of the visitor. 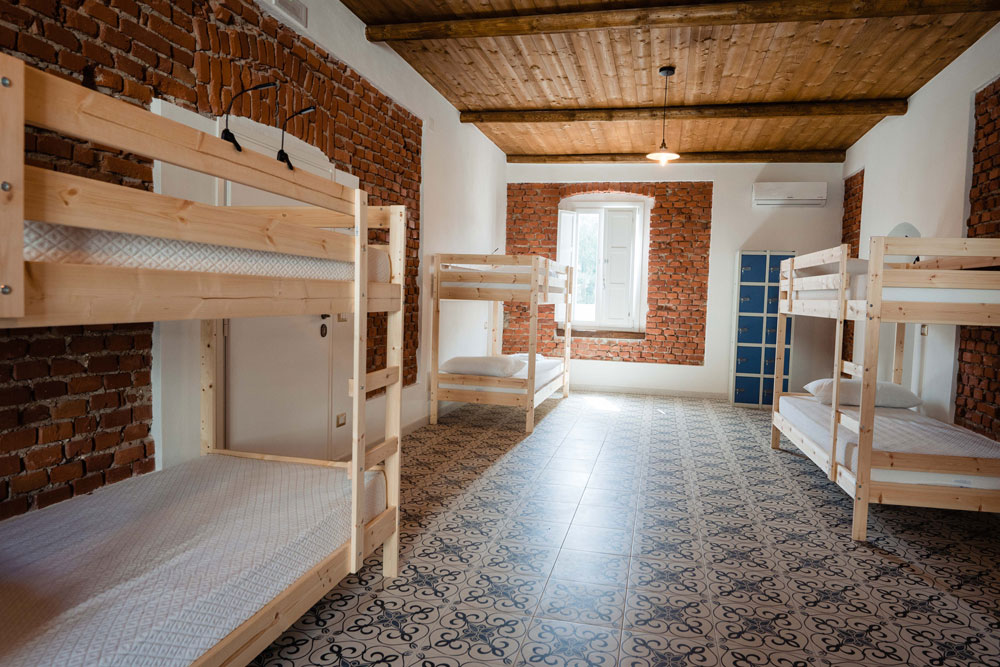 Hostel Silente Km 9 is located in Velina, 9 km from Castelnuovo Cilento, the starting village of the Via Silente. The hostel is the first facility dedicated to the bicycle touring route through the entire area of the Cilento Vallo di Diano and Alburni National Park. The facility located next to the infopoint is housed in Velina’s oldest house and consists of a large dormitory space with 10 beds, two bathrooms with showers, a kitchen available to guests, a reading nook, and a large terrace used as a relaxation area and used to serve the cyclist’s breakfast. The hostel is not simply an accommodation facility but a place for meeting and exchange between those who are about to leave and those who have just returned from their long journey in the Cilento area. The place where the community of travelers materializes , among stories, advice, helpfulness and friendship. The ideal place to start than to return to.

They talk about us

/Articolo
We use cookies on our website to give you the most relevant experience by remembering your preferences and repeat visits. By clicking “Accept All”, you consent to the use of ALL the cookies. However, you may visit "Cookie Settings" to provide a controlled consent.
Cookie SettingsReject AllAccept All
Manage consent

This website uses cookies to improve your experience while you navigate through the website. Out of these, the cookies that are categorized as necessary are stored on your browser as they are essential for the working of basic functionalities of the website. We also use third-party cookies that help us analyze and understand how you use this website. These cookies will be stored in your browser only with your consent. You also have the option to opt-out of these cookies. But opting out of some of these cookies may affect your browsing experience.
Advertisement
Advertisement cookies are used to provide visitors with relevant ads and marketing campaigns. These cookies track visitors across websites and collect information to provide customized ads.
Analytics
Analytical cookies are used to understand how visitors interact with the website. These cookies help provide information on metrics the number of visitors, bounce rate, traffic source, etc.
Functional
Functional cookies help to perform certain functionalities like sharing the content of the website on social media platforms, collect feedbacks, and other third-party features.
Necessary
Necessary cookies are absolutely essential for the website to function properly. These cookies ensure basic functionalities and security features of the website, anonymously.
Others
Other uncategorized cookies are those that are being analyzed and have not been classified into a category as yet.
Performance
Performance cookies are used to understand and analyze the key performance indexes of the website which helps in delivering a better user experience for the visitors.
SAVE & ACCEPT
Powered by